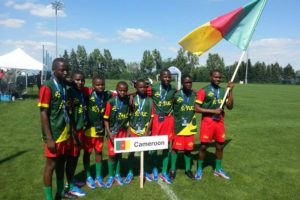 Eight boys and Coach Wallace left Cameroon in early August for this first trip outside of Africa! Their first trip out of Cameroon was earlier in the week when they traveled to the Bulgarian Embassy in Abuja, Nigeria to get their visas to travel. Needless to say, this was an exciting opportunity for everyone involved to have the trip of a lifetime! SATUC (Sheikha Al-Thani Tournament for Under-privileged Children) is an epic gathering of youth from across the world to celebrate the power of football (soccer) to inspire change in their lives. The second edition of the World Cup-style tournament (the first one was held in Egypt in 2015) featured 16 teams of boys ranging in age from 13-16 from around the world. The tournament hosts sponsored the entire trip (airfare, hotel, ground transport, food, etc.), so there were little expenses which CameroonFDP incurred. The CameroonFDP United team came ready to play! They lost their first match 1-0 against Mexico and then moved on to crush Indonesia 10-1. The quarterfinal stage was next and the team representing our neighbor, Nigeria, was just too much for our boys. After a hard-fought competition against a much bigger Nigerian team, we lost 6-0.  But the spirits weren’t dampened… there was too much ambiance on the sidelines and in the hotel for that! After the knock-out stage, CameroonFDP United continued to showcase our values and everything they learned in Kumba over the past few years. According to COO Peter Ngwane, our boys took away the award of ‘best losers’ from the event and there are surely better days ahead!