Reflecting on the Kumba Massacre one month later: too close to home. 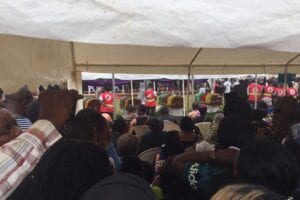 Two weeks ago, I attended the state funeral for those who were killed in the horrifying incident which took place at the Mother Francisca Bilingual Academy in the vicinity of Fiango in Kumba, the city where I grew up. While the government of Cameroon did it’s best to give a fitting funeral to honor and remember those who lost their lives, the inhabitants of Kumba and beyond are still to come to terms with the brutal massacre and assassination of seven school kids. The deaths, which have sent a shock wave across the world, are a direct consequence of the four years ongoing Anglophone crisis in the North West and South West regions of the country. Despite international call for transparent and credible investigations, no real account of what transpired at the scene on that faithful day, now commonly referred to by inhabitants of the city as “Bloody Saturday”, has yet been pronounced by the powers that be.

So far, we have only witnessed a colossal exchange of accusations and counter accusations between the state’s armed groups and the non-state armed groups, attributing the bloody massacre to each other. This war of propaganda has left inhabitants of the city a gasped and with a million-dollar question of who is responsible for this inhumane massacre of innocent school children, whose only crime is going to school to better themselves, family and community. After this incident I was afraid to send my own children to school. Others joined me in this widespread fear, and it is only just now as I am writing this that I am timidly allowing my daughter to return to school.

The community of Open Field was not left out, as we mourned two of our own who were victims in this unfortunate incident. As we keep mourning our dear ones in pain and agony, we are looking anxiously in the future for justice to be done.

The city of Kumba, home to the organization for the past 10 years and our staff for many more years before that, does not look the same anymore. It will be a long time before we can recall fondly our days of growing up and schooling in Kumba without the blood stain and heavy heart thinking of those who lost their lives in the same classrooms we once learned in – the same classrooms where hundreds of our youth program participants are now returning to.

Our hearts go out to the millions of mourners of this gruesome crime across Cameroon, the entire African continent, and around the world, and most especially to the bereaved families. We stand with you and call for an end to the senseless violence and promotion of peace for the future.