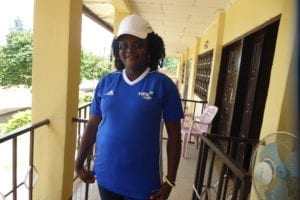 Kumba, Cameroon — Dreams do come true and can be seen in the life of Agnes Njui Ekoh who is the President of Female Football in Meme Division, Kumba. Growing up, she refused to accept that sport (soccer) was meant just for males. She knew that females have a vital part to play using sport as a tool for social change.

She has always known the value of football as a tool of peace building, a platform for learning, and a way to have fun. She loves football so very much and she encourages young girls to take it very seriously as it can serve as a means to keep fit and a platform to make friends and travel elsewhere for cultural exchange. Agnes has been a model to so many youths in the way she speaks, leads, and interacts with the community. She has been looking for ways to give back to the community where she belongs. She has supported Open Field for over eight years and admires the work of the organization. Being appointed president of Female Football means she will now have a greater ability to change the lives of girls in our communities.

Her speech after her appointment was geared towards gender equality which to her is not only a fundamental human right, but a necessary foundation for a peaceful, prosperous and sustainable world. She also promised to fight gender-based violence, violence against women, and to promote female leadership. She is and will always remain a woman of integrity.