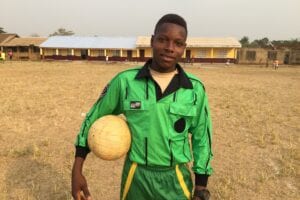 During the early days of the escalation of the Anglophone Crisis in 2016, Ferdinand was happily living with his parents in a peaceful and loving community known as Ekombe in Meme Division, outside of Kumba, where Open Field’s Cameroonian headquarters is located. He was caring and loved by all, showing a lot of respect for both his elders and peers.

But things began falling apart as the Crisis worsened. It happens that his community was one of the most affected in the South West Region. One day, cross-fire fighting between the military and separatists forced everyone to run for their lives. From that day he separated from his parents and siblings and then found himself in Kumba (Mile One). With nowhere to go, he was fortunate to gain the help of his friend, Samuel, who pleaded with his parents to take in his friend as their own. 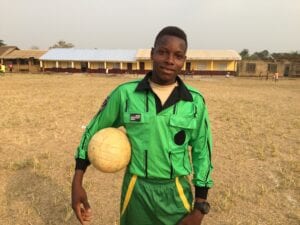 Ferdinand was traumatized. While living with Samuel’s family he grew more and more worried about the well-being of his parents and siblings. He didn’t know where they were.  He felt all was lost. Ferdinand became very arrogant and disrespectful to everyone around him.  It came to the point where started stealing money and other stuff in the house and Samuel’s parents once threatened if he continued with such behavior they will send him to the streets.

Samuel is an active Open Field participant and has been since 2017. So he decided that the best he could do to help his friend was to introduce him to the Open Field’s ongoing initiative sponsored by United Nations Development Programme (UNDP) called “SCORE GOALS: Social Cohesion Opportunity for Recovery and Engagement through Goal Orientation and Advancing Life Skills through Sport”. Open Field happened to be doing mobilization and recruitment of internally displaced youths so as to give them hope and to instill the courage to move on and to fight for their future. Samuel helped to ensure that Ferdinand got registered with Mile One community and started taking part in the program.

Ferdinand continued to be very confused as to what he will become of him in life since he has no one to sponsor him to further his education. One day decided to shared his worries with the Community Leader, Harrison. Harrison encouraged Ferdinand to increase his participation and get more involved in activities. He listened and it was not long before he became very active and was selected as one of the match officials during the tournament.

Over time, Ferdinand came to understand that he was not alone and that the Open Field team and participants were here to support him. Reflecting on his first season as a youth leader he said this:

“While growing up, I hoped to pursue a career as a teacher but was so discouraged since I lost my parents and have no one to support my education. Open Field staff always give us hope and are here to support us. I see them now more like my family than just my coaches. Since taking part in this program I now realize that I can still educate my peers on the football field now. I don’t have to be a teacher to have an impact on others. I know my parents, wherever they are, would be proud of me for what I am doing in my new community.”