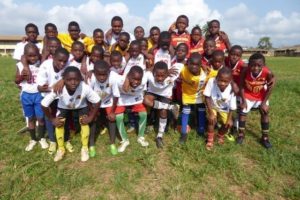 CameroonFDP #PLAY4PURPOSE 5V5 tournament was a one- day tournament full of fun, which attracted eight teams from four communities; Kumba town, Meta Quarters, Kosala and Nkamlikum, for an exciting fast paced event. The event started at 8am with all the teams present and dressed with branded equipments thanks to our donors. The teams were drown in two pools/groups, with four teams on each pool/group; A and B respectively.
What I love most about the event is that it gets the youth participants ready for the next level. With more than just soccer being the motivation. The next level which is the mini super cup is going to set the foundation for competitive engagement. This kind of competition at this level is giving you everything to be prepared. After play for three hours with several breaks Forzano FC from kumba town emerged first in group B and Martin Luther FC from Kumba Town in group A . Overall was one of the best tournaments we’ve attended because it was low commitment, low stress, and clear on what kind of tournament it wanted to be.”